A Perfect Weekend in Malaga, Spain

Planning a weekend in Malaga? Here’s my list of recommended things to do in Malaga. 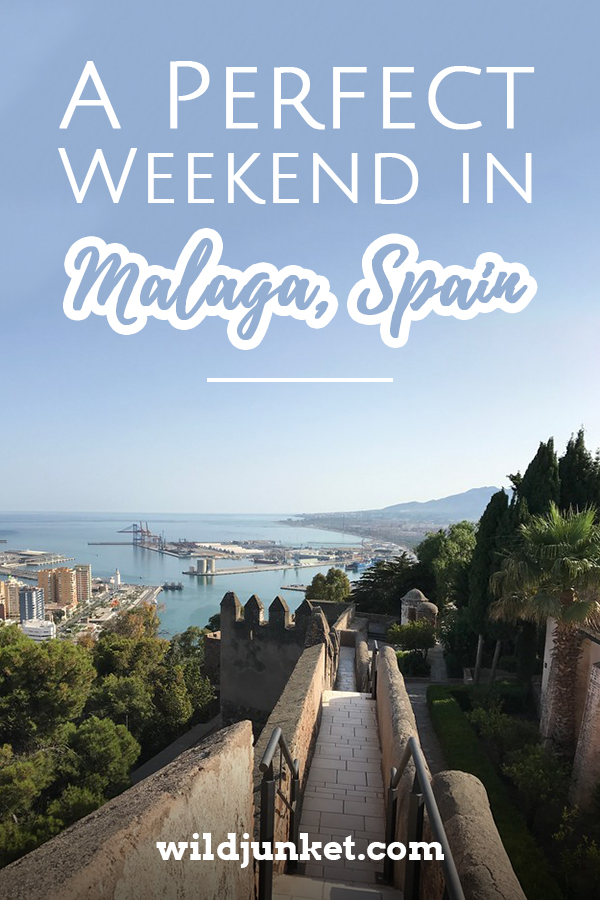 For travelers in Europe, Malaga is often seen as a touristy destination that has  been simply ‘overdone’. This coastal city in southern Spain was the hottest beach destination in the 1980’s, and it continues to be a popular holiday spot for those seeking sun-kissed beaches and all-night-long parties.

For that reason, I’ve always avoided it even though we live just an hour’s drive away. After spending last weekend in Malaga though, I finally realised what I’ve actually been missing out on. Here are some ideas for your own visit.

READ NOW
Living in Spain: What It's Really Like 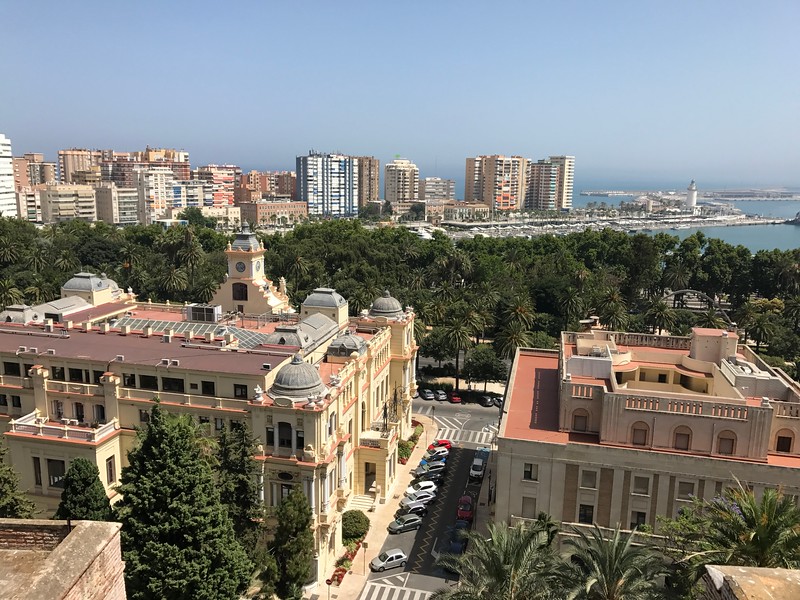 Malaga city itself turned out to be a charming historical city brimming with beautiful architecture and artistic attractions. It’s quite a different world from the nearby beach towns like Torremolinos that seem to be stuck in the 1970s: Malaga city is vibrant, colourful and eclectic, with layers of history and culture under its surface.

What’s more, the city has recently undergone a revival in its art scene. Its mayor Francisco de la Torre plans to turn his city into a cultural hub, pumping millions of euros into improving its arts offering. Several new art museums have just opened, and in the works is Malaga’s new Museum of Fine Arts and Archaeology will reopen later in 2017.

With a reputed 320 days of sunshine a year and a city centre packed full of historic and artistic attractions, Malaga is an excellent destination for a relaxing yet experiential weekend. Here are some essential sights for the perfect weekend in Malaga:

READ NOW
Things to Do in Mallorca Beyond the Resort 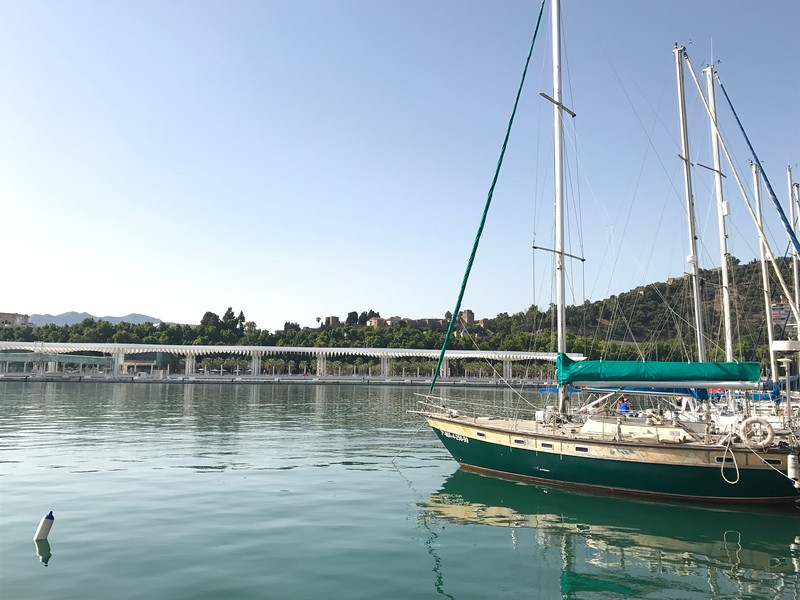 Do a Treasure Hunt in Malaga’s Old Town

A sightseeing treasure hunt can be a fun and fulfilling way to spend a weekend in Málaga, solve fun puzzles and tasks, and learn about the city’s history and secrets at the same time. The tour combines a classic city tour with treasure hunting elements (golden GPS compass, treasure book, and treasure hunting material).

It will take you through most of the old town, including Plaza Merced, the Cathedral, the Park Area, and Teatro Cervantes. At each station you have to solve a small riddle or look for a hidden clue.

Instead of being limited by a guide or a big group of other tourists, this treasure hunt lets you explore independently, at your own pace. We spent around five hours doing the treasure hunt, slowly taking our time, eating tapas and enjoying ourselves along the way. It’s a great experience especially for families — our 2-year-old daughter loved the whole idea of hunting for treasure and she squealed when we found the treasure!

To book the treasure hunt, head on over to TripVerse and create a trip to book the tour. Here’s more info on how to book tours on TripVerse. 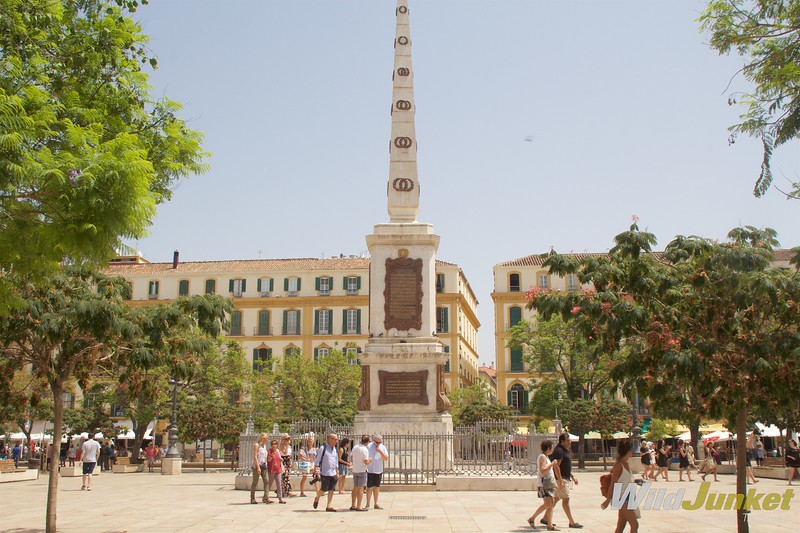 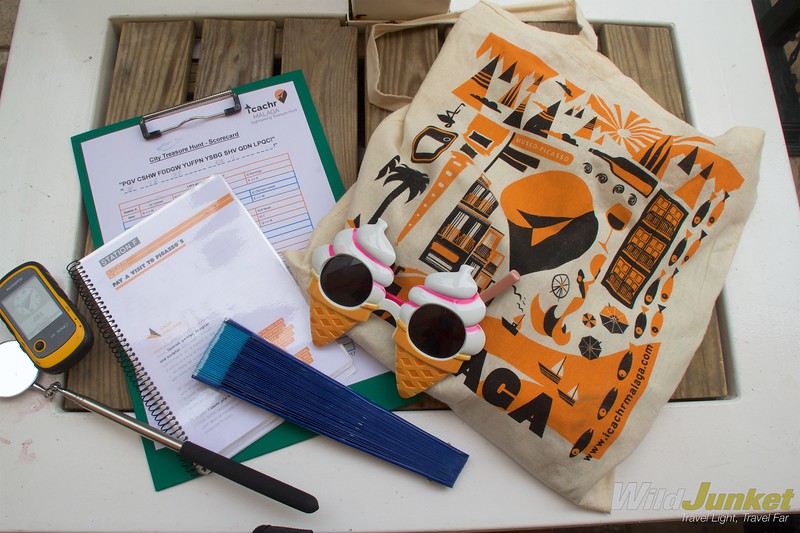 Wonder through the Ataranzanas Market

One of my favorite places to visit in any Spanish city is the local market, and Malaga is no exception. The Ataranzas Market, more commonly known to Malagueños as the ‘Mercado Central’, is an important landmark in Malaga and is richly steeped in history.

What’s most intriguing about the market is that it was once a grand seven-arched shipyard, with the sea lapping right at its doors. This was how it got its name “Ataranzas” which means shipyard in Arabic.

Over the years, Ataranzas underwent many transformations, from shipyard to convent and even military fort, before eventually becoming a market. These days, it’s a joy to wonder through the maze of fresh seafood and spices, along the Arabic archways, the carefully forged iron works and the stained glass windows. 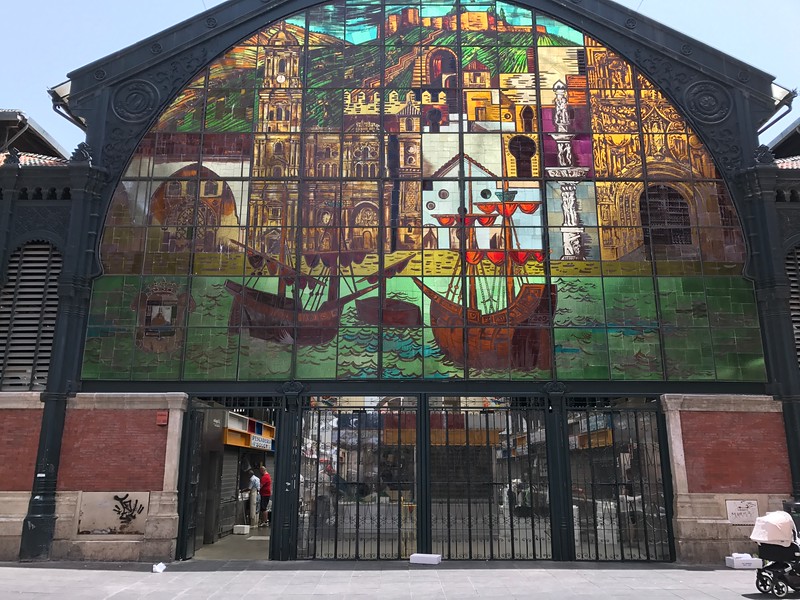 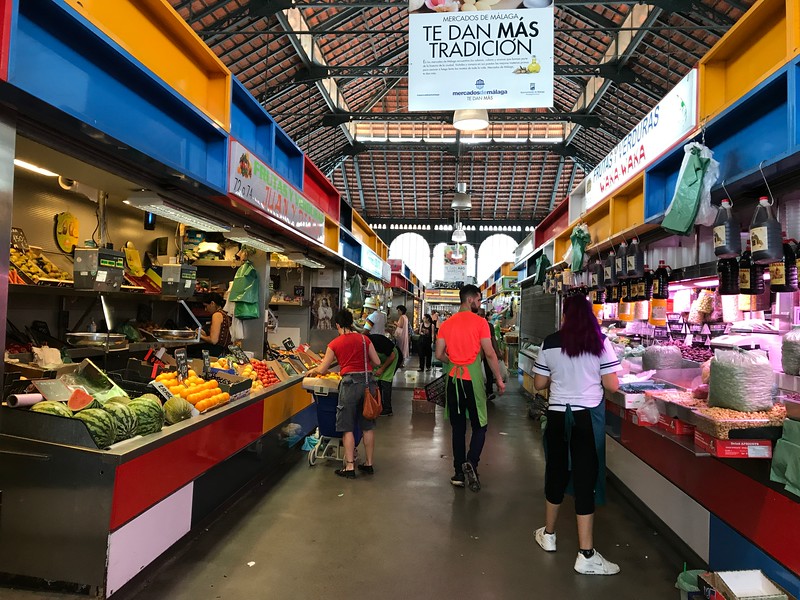 Head to the Alcazaba and Gibralfaro Castle for the Best Views

The Alcazaba fortress, a smaller version of Granada’s famous Alhambra, is the city’s most iconic landmark and is one of the most important Muslim architectural works in Spain. Perched atop the historic centre, the Moorish fortress palace is a well-preserved complex set amidst a maze of gardens and fountains, with beautiful views of the casco antiguo (old town). To get up there, you can climb up the steep slopes from the back of the Roman theater or take an elevator from the back of the Ayuntamiento de Malaga.

Above the Alcazaba stands the Castillo de Gibralfaro, a 10th-century castle that overlooks the coast. The castle has been mostly restored and also features a military museum, but the panoramic views alone make it worth a visit. It can be reached by bus or foot, but it is well-worth making the step climb to enjoy the scenic view over the city. Additionally you can get to Gibralfaro via the scenic walkway of Paseo Don Juan de Temboury, located to the south of the Alcazaba.

READ NOW
Is Granada the Best Place to Live in Spain? 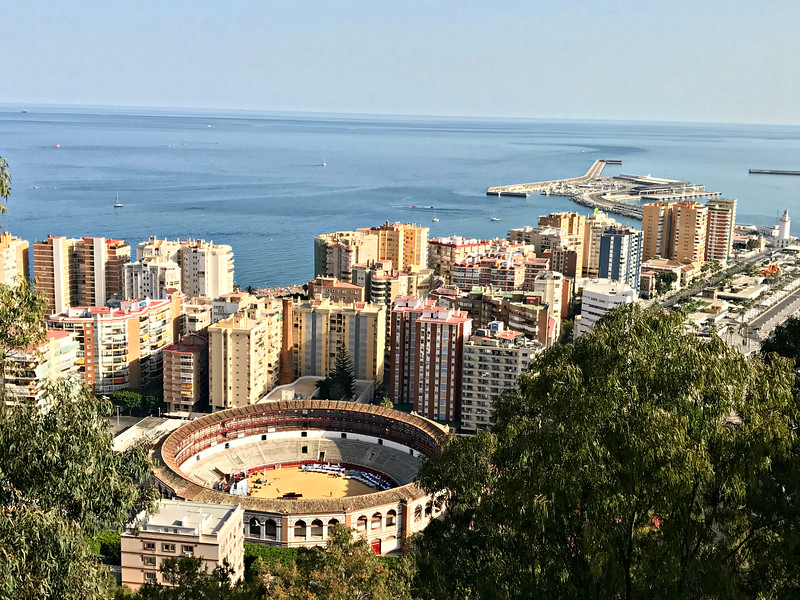 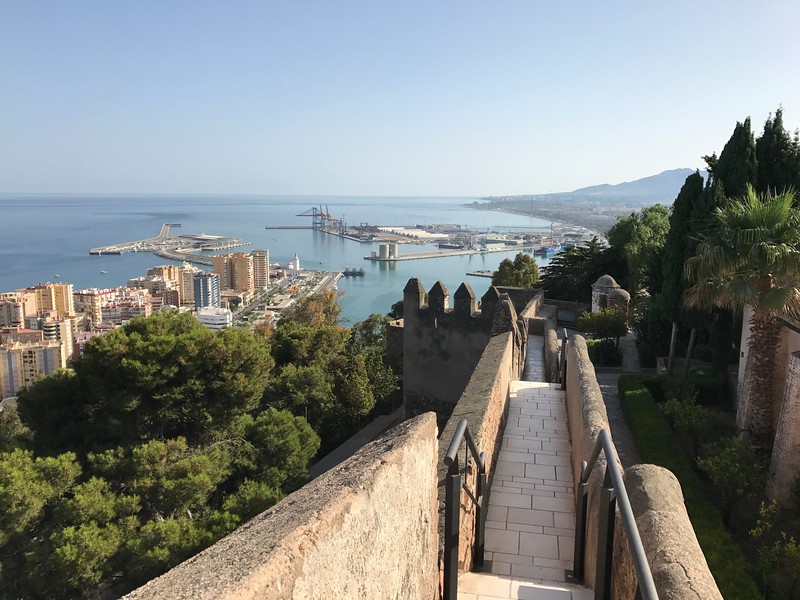 You can’t turn a corner without finding a museum in Málaga: there are over 30 in the city. Art is the focus for most of them, seeing that Malaga is the birthplace and early inspiration of Pablo Picasso. Pay homage to the main man at the Picasso Museum, and see everything from his well-known Cubist paintings to surreal sculptures and sketches.

In conjunction with the mayor’s efforts to turn Malaga into a cultural hub, a new branch of The St Petersburg State Russian Museum is newly opened, showcasing art from the 15th to the 20th centuries. Another new museum is the Centre Pompidou Centre, the museum’s first foray out of France.

Another museum worth visiting is the Automobile Museum, which is surprisingly fascinating even for non-auto-fans, alongside the vintage and modern cars, high fashion from the 1920s-50s is on display.

To avoid waiting in line at the museums, book your skip the line combination tickets on TripVerse. 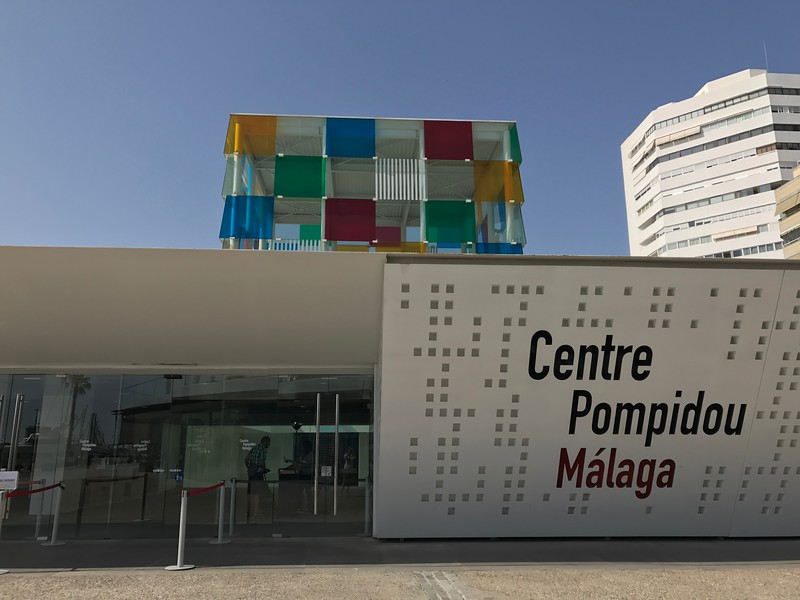 Relax at the City’s Beaches

Being a coastal city, a beach is never far. There are over 15 beaches within Malaga’s city limits. They can get rather crowded in summer, but sometimes they’re the only place you can take respite from the sweltering heat.

You’ll find many of them are actually easy walking distance from the centre of Malaga. Playa de la Malagueta is one of the most popular beaches with both locals and tourists — it’s packed to the brim with restaurants and bars, so you definitely won’t go hungry here.

The nearby Playa de la Caleta stretches over 1km long, and is a favourite among the sporty types, so you’ll often find people playing volleyball. Another great beach is Pedregalejo, said to be the best spot in Malaga for fresh seafood. Cooked on embers in boats on the sand, the must-try is espeto de sardinas (just-caught grilled sardines on a stick). 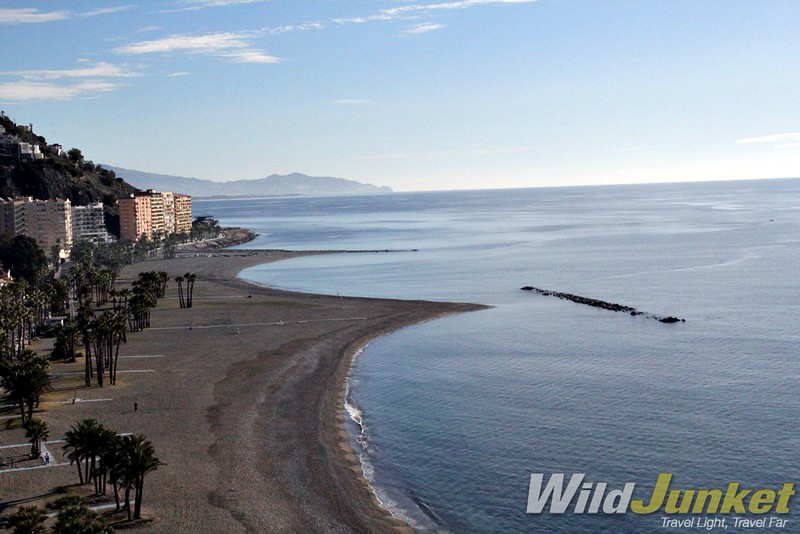 Stroll along the New Port

Malaga’s new waterfront, Muelle Uno (Pier One) is a slick and stylish area conveniently located near the city centre, within easy walking distance to all of Malaga’s cultural and historical highlights. It’s just across the road from one of the city’s biggest parks and within a ten-minute stroll from the Alcazaba.

Opened only in 2011, the 14,000m2 shopping and commerce centre is home to restaurants, shops and has underground parking for over 1000 cars. It’s home to Malaga’s only Michelin-starred restaurant, but there are also numerous other cafés and bars that cater to different budgets. At night, the pier is backdropped by the glittering lights of the city and is the perfect spot for a romantic night out with loved ones. 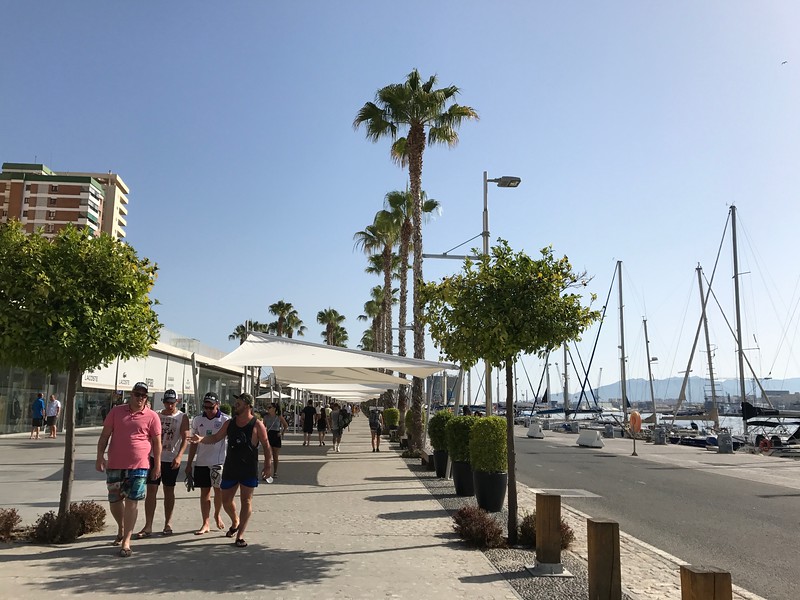 The subtropical climate and maritime location of Malaga mean there’s plentiful fresh produce, exceptional local wine, melt-in-the-mouth jamón and top seafood – the locals are nicknamed boquerones (anchovies) because of the quantities they eat. There are countless great bars and restaurants, and more opening all the time, but eat late if you don’t want to look like a tourist – Malagueños go out late, and dining after 10pm is the norm.

El Pimpi is a Málaga institution that I highly recommend visiting not just for the food but for its atmosphere. With a big terrace right opposite the Alcazaba, it may be a tourist hotspot, but remains authentic and popular with locals, too. Inside it’s all old tiles, wood beams and barrels signed by visitors including celebrities such as local boy Antonio Banderas and Paloma Picasso. 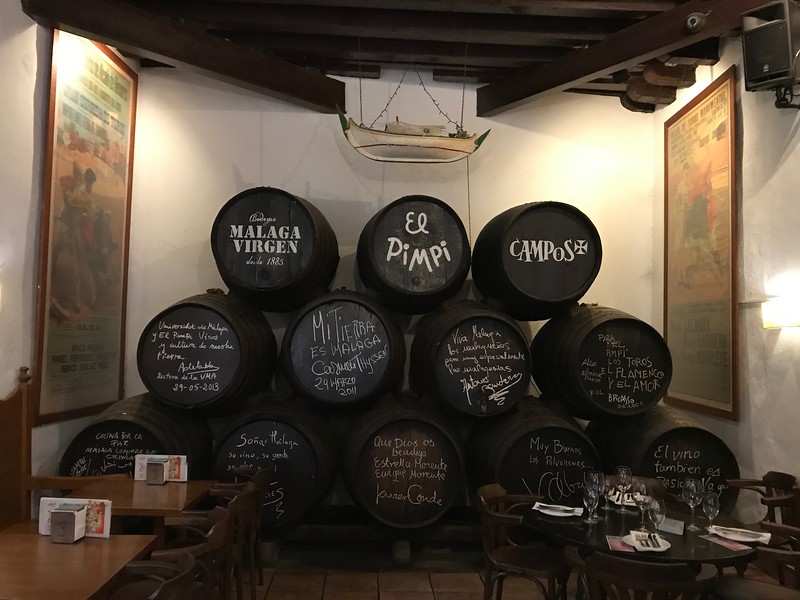 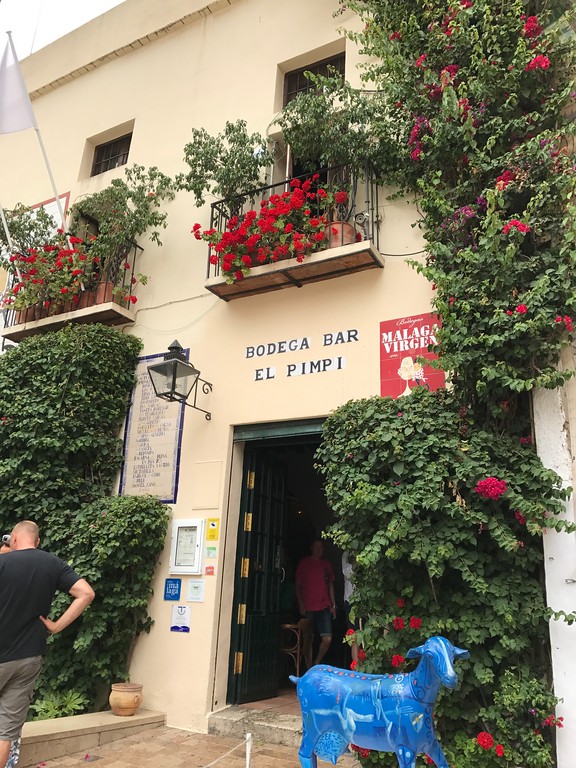 How to Plan Your Trip:

To plan this perfect weekend in Malaga, I used the TripVerse app to create my itinerary, book my tickets and experiences, and navigate my way around the city. It’s a useful tool to organize the perfect weekend trip, whether you’re traveling to Europe, US or Asia. Check out my my Malaga itinerary and feel free to use it for your own trip!

READ MORE: WHAT IT’S LIKE TO LIVE IN SPAIN