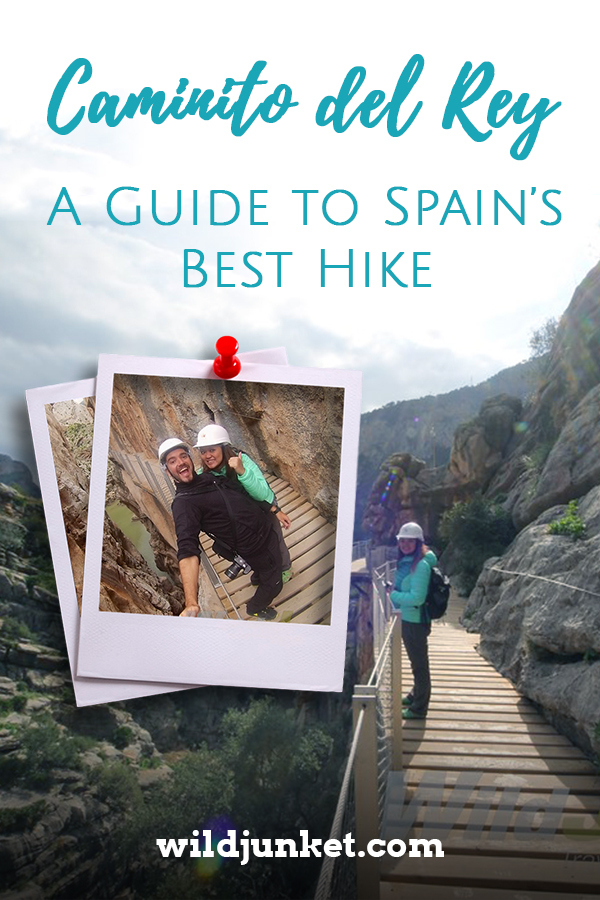 In the seven years that we lived in Spain, we did plenty of hikes in the Sierra Nevada mountains and all over the Granada province. But none of them compared to the Caminito del Rey in Malaga, which truly stood out as the most spectacular trail we’ve ever done in Spain.

Once known as the world’s most dangerous pathway, Caminito del Rey is a 100-year-old hike that stands at a staggering 105 meters (nearly 350 ft) above the river below. For a period of time, the path was a well-kept secret among rock climbers and adrenaline junkies, who were drawn to the crumbling, narrow path that had fallen into a shocking state of disrepair.

After four years of restoration, the walkway has finally reopened to the public and it’s now an easy yet exciting and scenic hiking trail. With a combination of wooden boardwalk and glass-floored lookouts, Caminito del Rey is much safer than before — but the beauty of the dramatic setting and thrill of treading a narrow path from such a dizzying height remain. 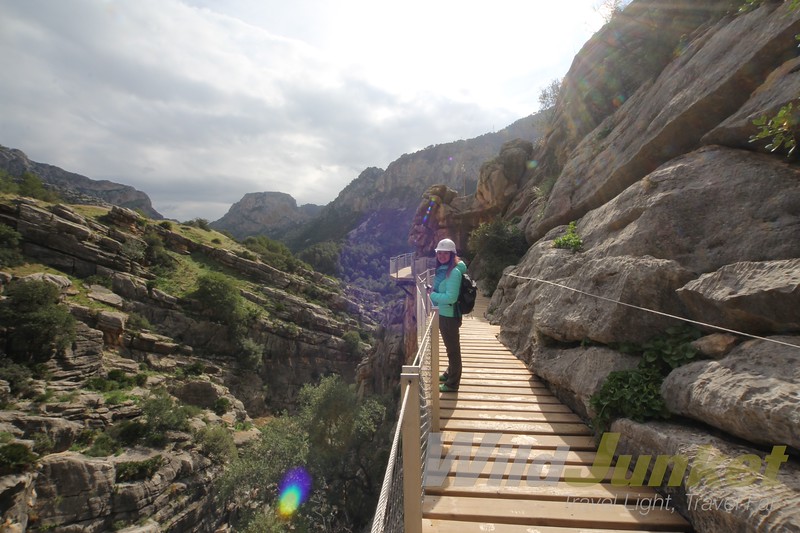 What is the Caminito del Rey?

Translated into English as ‘The King’s Little Pathway’, the Caminito del Rey was named after King Alfonso XIII, who inaugurated the pathway in 1921. He  found this unique and spectacular trail and made it famous around Spain.

The ancient path winds along the steep walls of the Gaitanes Gorge in El Chorro, a remote part of Malaga province. Far from the touristy beach towns that line the shores, this part of Malaga looks like a set from an epic fantasy adventure like Game of Thrones or Lord of the Rings. The harsh, arid landscapes make for a dramatic setting to the cliff-walk.

The Caminito del Rey gives both a thrilling and awe-inspiring experience as you traverse along the rocky cliff-faces and cross footbridges. Craning your neck beyond the walkway will easily give even the most hardened traveler vertigo.

The best thing of all: the new Caminito makes you feel like you’re doing something dangerous – without the actual risk of danger.

READ MORE: A Weekend in Malaga 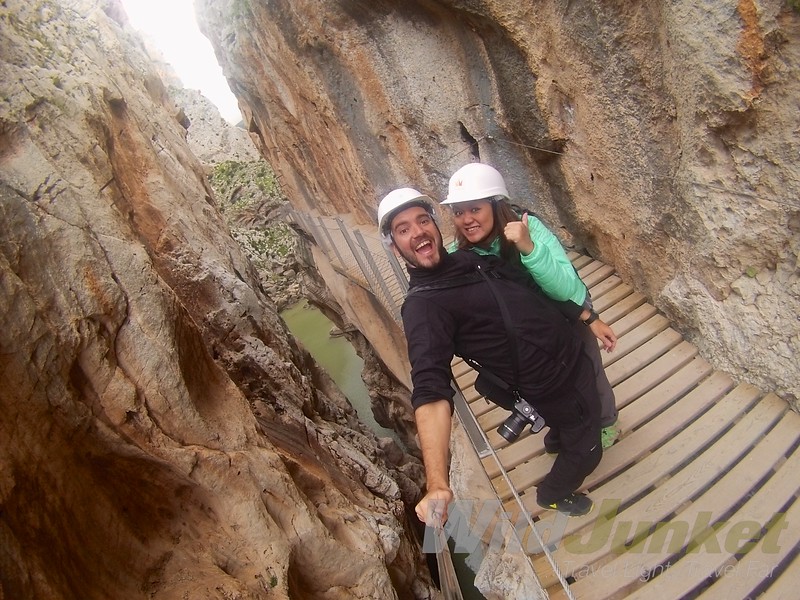 History of the Caminito del Rey

The Caminito was built way back in 1901 as a walkway for construction workers on the hydroelectric plants in El Chorro and Gaitanejo. Years after the workers left, the old pathway fell into disrepair. Held up by just slabs of crumbling concrete and rusty steel, the path clinged precariously to the vertical canyon walls with its bare bones.

Over the years, adrenaline junkies and daring rock climbers started streaming in to this hazardous path, to get a shot at tackling this notorious trail. The Caminito del Rey claimed the lives of five hikers, the most recent deaths occurring in 2000. There were many more accidents after that. Caminito del Rey eventually gained the dubious nickname as “the world’s most dangerous walkway”.

In 2000, the government of Andalusia decided it was time to do it some justice (the path hadn’t been maintained since the 1920’s). The trail was then closed off for four years, though that didn’t stop the thrill-seekers from illegally trespassing.

Today, the Caminito is much safer but just as spectacular as before. Remnants of the old pathway can still be seen below the new wooden boardwalk, hanging precariously off the craggy walls. 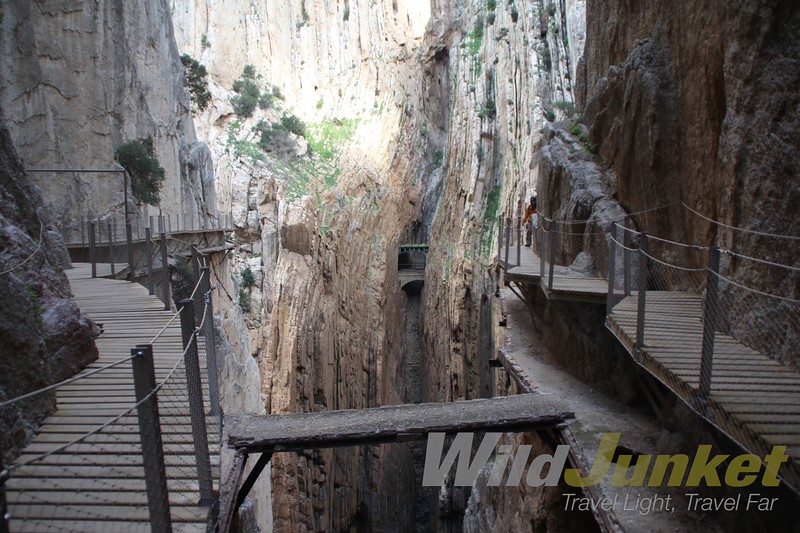 For most parts of the walk, I found myself feasting on the sights and being blown away from the magnitude of the cliffs and landscapes — rather than being scared. No doubt there were moments when I tightened my grip on the railing when we were standing on the glass-floor observation platform, but most of the walk wasn’t frightening at all.

At the checkpoint of the Caminito’s entrance, we were met by a ranger who checked our tickets and handed us helmets before giving a short briefing of the rules. We were told not to use a harness, selfie-stick or umbrella and to walk on the right side of the boardwalk at all times. 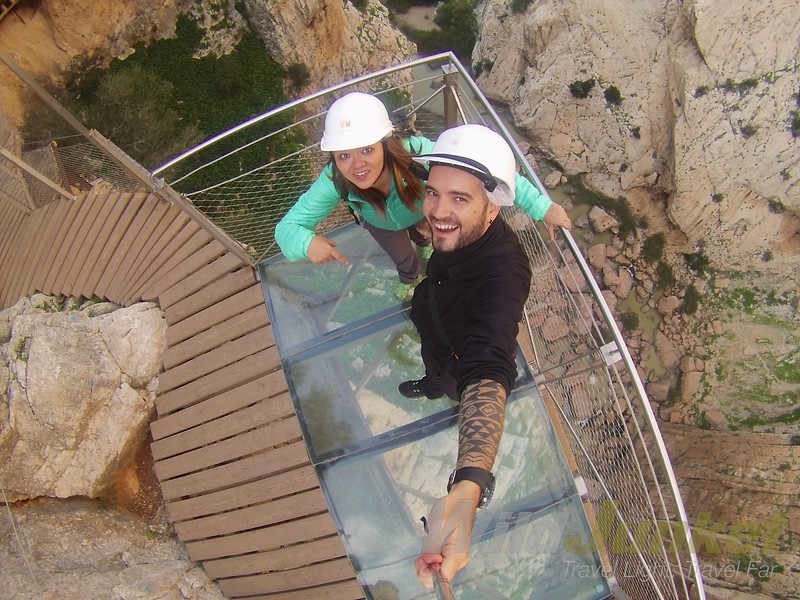 The entrance then led to a wooden board walk, and we traversed alongside hundred-year old aqueducts which once connected the two hydroelectric plants.  I would recommend opting for a guided tour (We didn’t have that option when we visited) to hear about the construction and restoration of the pathway and hydroelectric plants.

We then caught our first glimpse of the gorge, where crystal clear waters ran quickly beneath our feet. The water was green and refreshing, almost tempting us to plunge in. The track then continued downhill, almost reaching the water level. At one point, we also weaved through an old tunnel via the path’s original stairs. 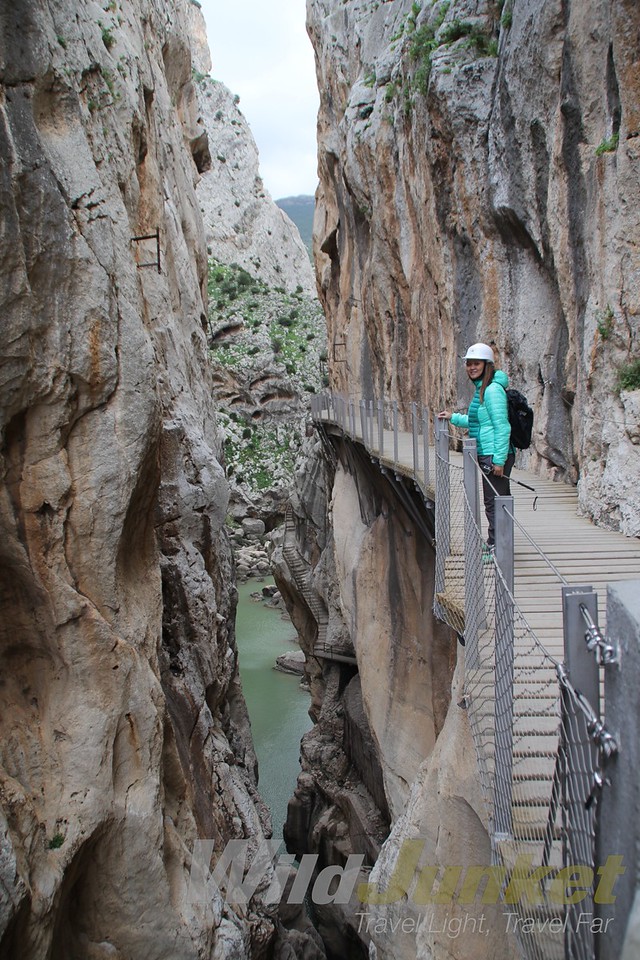 At the end of the first boardwalk section, we found ourselves walking into a thick pine forest. It was similar to the pine forests found in the Sierra Nevada mountains, but right in front of us was a sheer cliff looming high amid the greenery. We took a break here, stopping for some snacks and drinks to refuel ourselves for the last stretch.

After crossing the pine forest, we finally got to the part that the Caminito del Rey is best known for. The narrow path snaked around the cliff face, suspended 100 metres above ground. On the glass-floored lookout, we could see the remains of the original, dilapidated concrete path below our feet — but thankfully from the safety of the new walkway. Eventually, we got to the footbridge that marked the end of the trail. 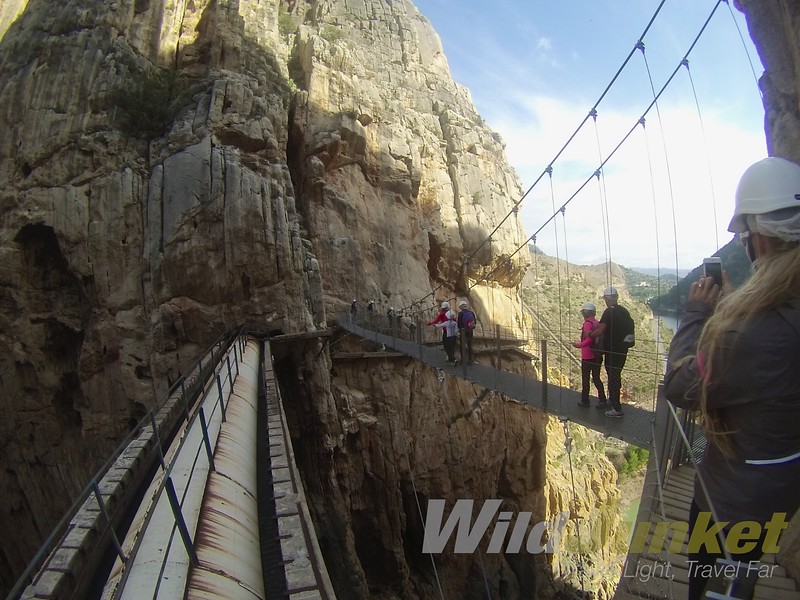 Who Can Walk the Caminito del Rey?

Thanks to the great restoration work, you don’t need nerves of steel to do this trail. In my opinion, almost anyone can do it (as long as you can walk 3km)— you don’t have to be extra fit or experienced in hiking. You might get a little freaked out if you have vertigo, but trust me, the hike is well worth it.

There’s an age limit: kids under 8 years old are not allowed to walk the trail. We couldn’t bring our 3-year-old daughter for that reason.

Keep in mind to wear comfortable hiking shoes, a hat for the sun and bring drinks and snacks for the hike. But a small daypack should be enough for all that. 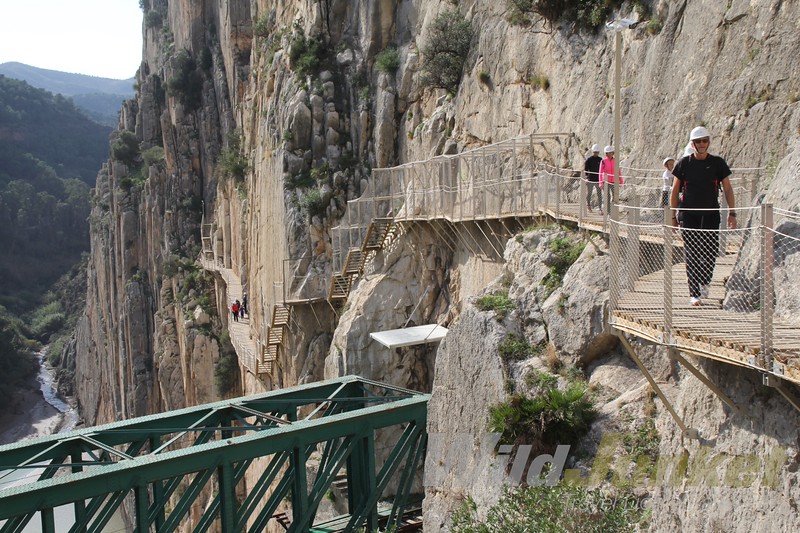 How Long Does the Walk Take?

In total, the hike is about three kilometres long from entry to exit, plus a little bit of off-trail walking on both ends between the parking and bus stop.

The full walk takes between 2-3 hours depending on your speed. Take your time to drink in the views, enjoy the experience and take photographs. If you’re driving from Malaga for the walk, make sure to reserve a full day for the walk. You’ll need to factor in time for lunch, for the shuttle bus ride back to the carpark etc.

The walks are scheduled for every half an hour, in groups of 50. You can choose a time for your walk when booking your tickets online. We chose a morning hike (10am) as the sun wouldn’t be too high then and it would be the perfect temperature. 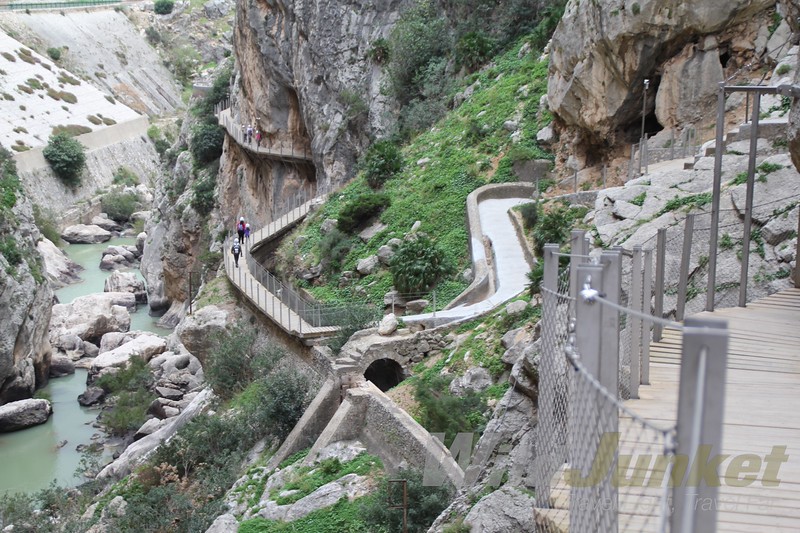 How to Walk the Caminito del Rey:

Numbers are somewhat limited, with a maximum of 400 people allowed on El Caminito at any one time (or 1,100 visitors per day).

When the Caminito reopened, entrance was free for a year (March 2015-2016) but you would have to book way in advance as tickets were snapped up very fast.  I was lucky enough to score entrance tickets back then, but now you can easily find tickets for the next day or even on the same day. 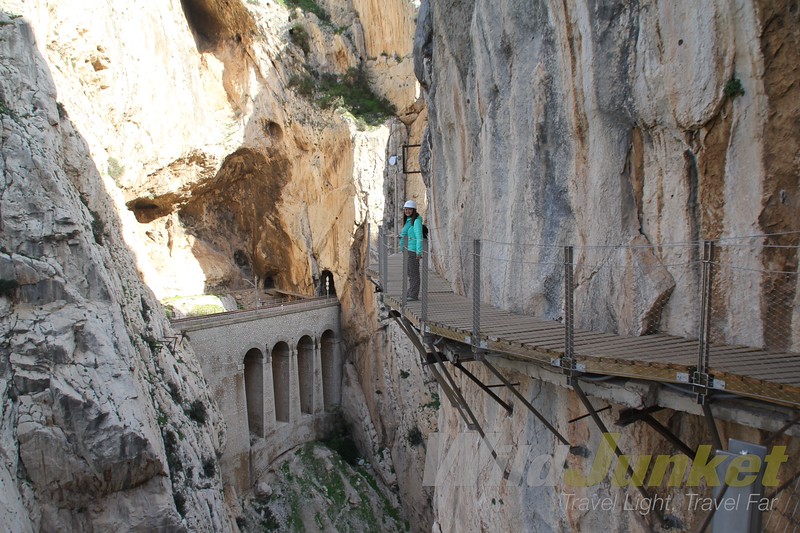 Entrance is now 10€  per person (which is pretty reasonable for such a well-built walkway) and 11.50€  including the bus service back to the start of the trail. You can also book Caminito tours that leave from Malaga and include a guide for 47€ per person.

There are also guided walks for 18€ per person. It is the same trail but a specialized tour guide provides information about history, geography and biodiversity in both English and Spanish languages to a group of visitors no bigger than 25 people.

Be sure to print out your ticket or download it on your mobile as you’ll be asked to show it when entering the Caminito del Rey. Children must show original documentation to proof their age. 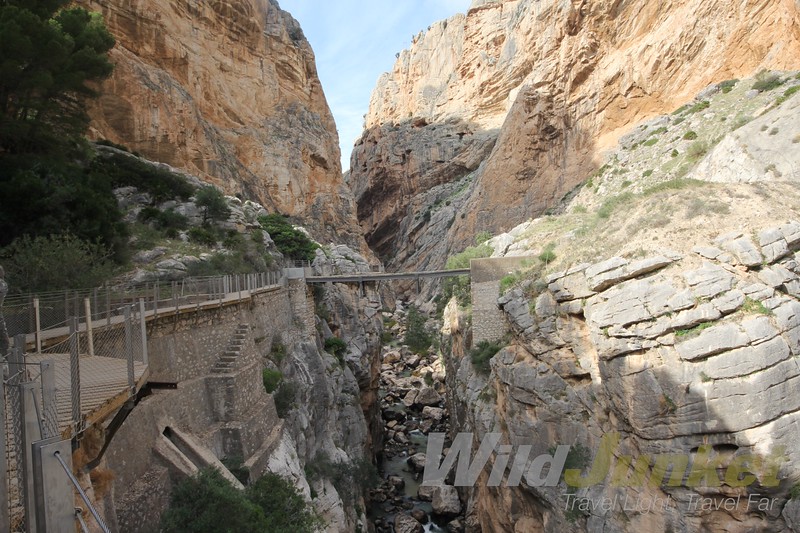 How to Get to the Caminito del Rey:

To get there, you’ll need to fly to Malaga International airport. The Caminito del Rey is 60 kilometers from the airport and Malaga city, which translates to around an hour’s drive. You can easily find cheap flights to Malaga from most parts of Europe on budget airlines like Easyjet and Ryanair for around 50€  return. Check for flights to Malaga here.

Renting a car usually costs just 30-50€ per day depending on the season/duration. You can also take the train from Málaga (Maria Zambrano Station) to Álora (El Chorro Station), which is one of the access points of the walk.

The Caminito del Rey has an entrance point (North) in Ardales and an exit point (South) in El Chorro. Both areas have carparks where you can leave your car. The route of the Caminito is linear, not circular, one way and descending from north to south. To return to the starting point, you make use of shuttle-bus service between the North access (Ardales) and the South (El Chorro-Alora), or vice versa. Return through the Caminito is expressly prohibited.

I would suggest parking your car at Ardales (next to the restaurant, El Kiosko Ardales), it takes around 20 minutes to walk from the carpark to the checkpoint. At the end of the walk you’ll need to catch the shuttle bus (takes 20 minutes) at the end of your hike from El Chorro back to the carpark. 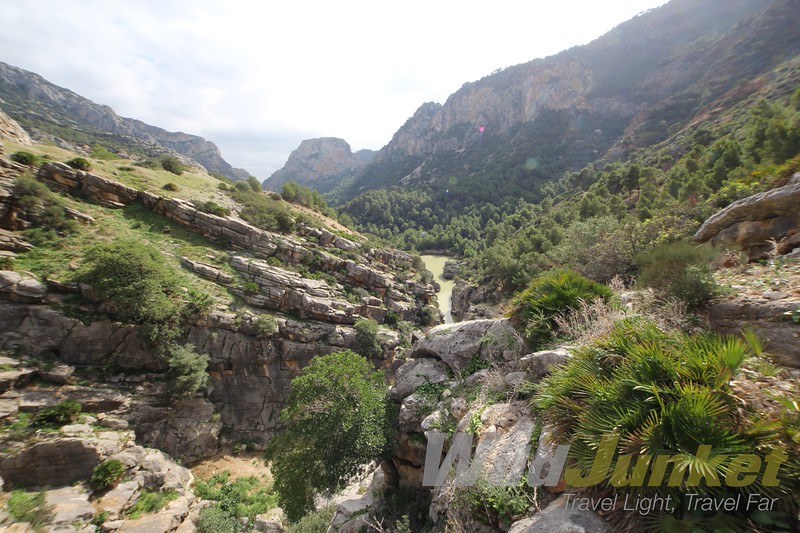 Where to Stay at the Caminito del Rey:

Most people do the Caminito del Rey hike as a day trip from Malaga city. There are plenty of hotels in Malaga to choose from, for different budgets and locations. Here are some of the hotels I recommend staying at in Malaga city centre:

If you’re planning to stay around the Caminito del Rey to explore more of this rural part of Malaga (which I recommend!), you won’t have as many choices but you’ll get to experience small-town life and get a sense of Spanish traditional living. Here are the best hotels in Ardales:

El Caminito del Rey is a must for anyone with a sense of adventure looking for an unforgettable, visually incredible experience, or for anyone who loves history and nature.

Are you planning to walk the Caminito del Rey? Let me know if you have any questions below!